If you know me then you know I am a bit of TV junkie. I love my tv shows. When I saw the post She Turned Her Dreams Into Plans did about her favorite shows of this season I thought I would follow suit. I would love to hear what shows y’all like and see which one’s we have in common? So here are some of my top favorites starting with my favorite to less favorites.

1. The Vampire Diaries– Yes it’s on the CW and yes it’s about vampires. But once you get past the first half of the pilot episode it’s no Twilight. I started watching this show my last semester in college because it is filmed literally 10 minutes from my Grandma’s house. I’ve gotten my husband hooked and two of my best friends. And my Grandma and I set off on a mission to stalk the filming and well yes this happened. 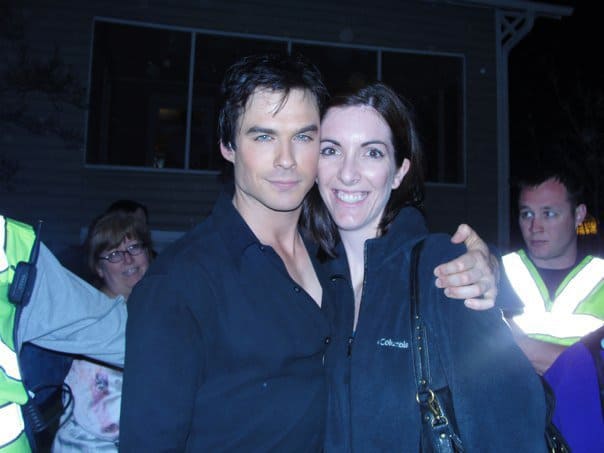 That’s me in total star struck, is this really happening, OMG look who is hugging me mind set. If you’re not familiar with Vampire Diaries then maybe you saw him on a little show called Lost? Ian Somerhalder. Yes I met him along with 3 other stars of the show. It was pretty cool, but that’s another story for another day.

2. Castle (Tyler’s #1 pick)– I love this show. Beckett and Castle are finally in love and well I’m happy. But of course there is drama coming. I can’t wait to see what happens this season. And yes I watch most crime dramas for the love story, if there isn’t one then I’m generally not interested. Oh and who else is so glad that Beckett grew out her hair from the first season?

3. Bones– Booth and Bones have drama. Rumors of a wedding. It’s been on for a long time and I say keep it coming. I love watching this show. It’s still funny and dramatic, oh yeah and they solve murders.

4. Pretty Little Liars– Yes I watch this and yes I try and try to figure out who A is? They wear things no high schooler is allowed to wear at school. They are in and out of classes. It’s hilariously unreal but so dramatic. It had it’s mid-season finale last night and my husband was so kind to cook dinner and let me watch it. You can ask him, I screamed when the very dramatic ending came.

5. Revenge– The first season of this show was amazing. The second season hit quite the slump but it seriously bounced back at the end of the season. And next season looks to be just as good and hopefully better! I’m Team Emily and Aidan all the way!

6. Rookie Blue– This is a summer show that is on right now. It’s so good! I always get excited come May when it’s coming back!

9. Parenthood– I was so relieved when they renewed this show. I feel like it is always hanging on the edge of being cancelled. I’m not sure why people don’t see how great it is! It’s on Netflix and you should really watch it. You will laugh and cry.

10. Nashville– I’m giving spot #10 to my favorite new show last season, I think. I feel like I’m forgetting something and my husband will most likely remind me of it. This show I hung on with it hoping it would get better and it really did about halfway through the season! It ended dramatically and I am excited for the next season!

So this is only top 10. Obviously as a TV junkie I have many other shows I could add to this list. I could also make a list of shows that ended too soon. Maybe one day. What do you think? What shows are you most excited to see again this fall?